In the Unlikely Event You Didn’t Already Hear About This, a Quick Recap

You may have recently heard or read about something a bit outside Apple’s usual product domain.

I’ll admit to not being the world’s biggest fan of Business Insider’s editor…or Business Insider in general.[1] But as it turns out…BI might’ve been the first to report on a really, really big story (even if fortuitously). BI’s Sam Colt reported on a mysterious unsolicited e-mail from “an employee at Apple” about “vehicle development”.

I was skeptical at first. The “employee at Apple” went unnamed and Business Insider didn’t even make a coy “the e-mail and employee appear to be genuine” type of statement – I mean, I would have. And the notion that said employee would risk near-certain termination from Apple (it’s not like they couldn’t find out who sent the e-mail), by contacting Business Insider?[2] Really?

Well, then we get some “corroboration” today from The Financial Times’ Tim Bradshaw and Andy Sharman, with the headline “Apple hiring automotive experts to work in secret research lab”.  (paywalled***) Then the WSJ followed up, with Daisuke Wakabayashi and Mike Ramsey’s sub-hed reading, “IPhone Maker Has 100s Working on Design of a Minivan Like Vehicle” (also paywalled***). As helpfully summarized by Jordan Kahn over at 9to5Mac, the new hires include a former Ford executive and the President/CEO of Mercedes-Benz Research & Development.

Yeah, this is starting to sound like something slightly bigger than CarPlay 2.0. And that the Apple employee might have been better described as an authorized higher-up. I have no idea if it’s for real – but what might some actual numbers tell us about what’s possible?

Stealth of Scale – Looking Back at a Well-Known Automotive Upstart

Which of course is Tesla Motors. I know, I’m no good at burying ledes.

Anyway, I assumed (and tweeted) that a project as big as a car would at some point become far too large to ignore even on Apple’s balance sheet. Sure, Apple incurs unknown tens of millions in R&D expense (or more) for things that may never, and won’t ever, shipped. But Apple would be essentially starting from scratch. There’s no foundational technology at all from which to build on. Apple Watch borrowed from iPhone, which borrowed from iPod and Mac and even Newton to some degree. An actual car? Build it yourself, “borrow” some other automaker’s platform as a head start, it wouldn’t matter! Expenses would be huge!

So I decided to test that assumption by checking on Tesla’s financials. After all, they started from scratch too.

First, some humble home gamer context. Real quickly – and I assume Wikipedia to be generally correct on the details – Tesla was founded in July 2003, with Elon Musk joining the company in early 2004. The Tesla Roadster prototype was introduced in 2006, and went into general production in March 2008. Meanwhile, the Model S was announced June 2008, with initial deliveries starting in June 2012.

Now, Tesla’s obviously quite small for an automaker ($3.2B in revenues in 2014), and its market cap “modest” compared to megacaps (at about $25.6B per Yahoo! Finance as of Friday’s close). But since no less than Elon Musk, rockstar CEO and poacher of Apple employees, is at the helm, its ambitions can be safely assumed to be vast. And since Musk, his team and his investors clearly wanted the company to succeed, it can also be safely assumed that Tesla was tooling up and investing in R&D as much as it possibly could, right on up to (and past) the absolutely key Model S launch. (Considering 2011 saw Tesla bring in about $204M in revenues but a $254M loss, “make or break” doesn’t seem too sensationalistic at all.)

So, let’s have a look at Tesla’s R&D expenses plus property, plant and equipment net values over the first seven years of what you might call its active business phase. Its first annual report is from 2011, but helpfully, it provides summary financial data back to 2006. (As far as I’m aware, Tesla is a standalone entity which accounts for 100% of its expenses as well as revenues.) 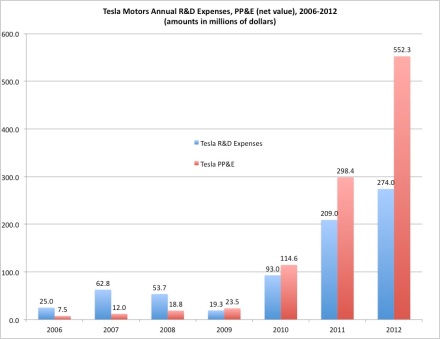 A bit surprised? So was I. The “hype” back then seemed a heck of a lot bigger than Tesla’s actual expenditures and investments. Even in 2010, with the Tesla Roadster shipping and Model S development well underway, total R&D was under $100M, and net PP&E value just over $100M.

Of course, Tesla was in the middle of a frantic scaling-up phase, and it showed in the 2011 financials. R&D expenses slightly more than doubled, and PP&E net value close to tripled.

So let’s assume Apple’s intent on entering the actual automaking industry, but with even grander ambitions and maybe even a faster development schedule than Tesla. It does have the resources to somewhat compensate for lack of expertise, after all. Just for fun, let’s “spot Apple a few years” and see what happens when you compare Tesla’s 2011 R&D/PP&E (with Roadster production winding down, and Model S soon to start selling) to Apple’s R&D and PP&E from 2013. 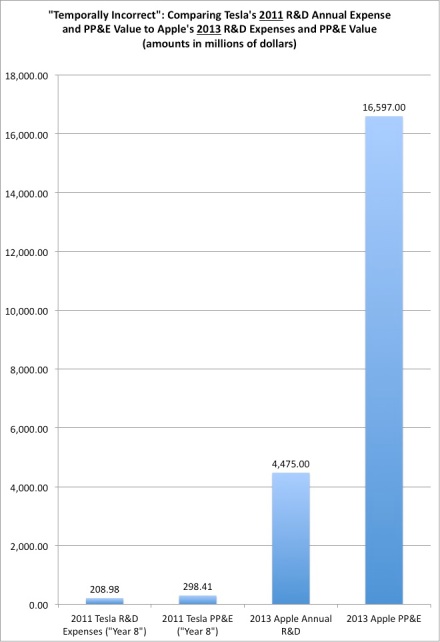 Let’s pretend Apple spent the same amount of money as Tesla on R&D and PP&E for this secret Apple Car project in FY 2013.

4.6% of R&D? 1.8% of PP&E?[4] That could easily have been mistaken for, say, development and tooling for iPhone 6 with those rumored bigger, sapphire screens. Even a watch prototype. Or maybe bigger iPads? Refreshed iPads? New Retina Macs? The ever-elusive next-gen or next-form-factor Apple TV? 😀

The “cloud cover” is also evident even if you compare Tesla’s 2012 R&D budget (Model S now shipping, plus Model X development), which, while about 31% higher year-on-year at about $274M, is a “mere” 6.1% of Apple’s 2013 R&D expenses. For indirect reference and a sense of scale, Apple signed a $578M prepayment agreement with GT Advanced sometime in 2013.

To wrap up, my takeaway from this exercise? Given Apple’s scale “even” in 2013 (supposedly, they didn’t greenlight the project until late 2013/early 2014), no one would ever have noticed an entire automobile development operation was well underway.

1 Responsible for dubious hits including “The iPhone’s Market Share Is Dead In The Water” (actually a reprise of a post from 2011, sorry, no link to this one).

2 To be fair, and to my “consternation” back in January 2014, none other than former Apple CFO Peter Oppenheimer cited a BI Intelligence report during an earnings call.

3 “Year 8” literally meaning Year 8 of Tesla’s existence. Or “Year 5” of the active business phase – either way, Apple’s been given a substantial hypothetical “head start” on Apple Car R&D, for instance.

4 (Yes, accounting types, I’m aware that “PP&E” might be a depreciable R&D expense for not-shipping products, but stay with me here.)

***There is “one weird trick” (heh) to legitimately getting a “free sample” article from either site. The only “price” (depending on how you look at it): Using one of at least two popular search engines (Bing, Google, I dunno) to do it.