UPDATE:  There’s an early report or two (Philip Elmer-DeWitt of Fortune appeared to be the first to break the news on this side of the pond) about a China Mobile subsidiary in the city of Suzhou putting up a “reservation to pre-order”-type system to order iPhone 5S and 5C on its website.  It’ll be interesting to see how the (potential) confirmation of a Apple/China Mobile partnership (albeit short of an actual pre-order system and a broader-based launch) affects, or doesn’t affect, AAPL during Tuesday trading.

Hope everyone had a nice holiday weekend (well, those who celebrate it).  As we’ve all seen by now, AAPL raced out of the decision gate in a seriously bullish way the past few days.

Just a handful of trading days ago, AAPL was at the precipice of what my amateur self perceived to be a very important technical inflection point.  The daily Bollinger Bands were seriously compressed (the most in many months), a reflection of AAPL’s coiling, pensive, whatever-you-want-to-call-it trading range over several weeks.  The MACD-h was trying to move back to positive territory.  AAPL was still hanging in there despite a post-earnings “disappointment”/breakout failure at 539.25, but the bullish hypothesis was getting a bit more questionable by the day.

When the time came to make a move, one way or another, AAPL moved up, very nicely.  After last Monday, which saw AAPL dip very close to the SMA-20 at 521, the stock made a potent multi-day move, pretty much “smashing” through downtrend lines and prior points of reference, all the way up to 564.33 as today’s intraday high.

Passing the bullish test with flying colors?  To my untrained eyes, heck yes.

The question of the moment is what happens next, now that AAPL’s temporarily through making new trend highs and had to settle for a 551ish close, a baker’s dozen points off the intraday high, and very near the lows of the day.  (It’s a micro-timeframe change in composure for a stock that was looking short-term overextended and very due for some kind of pause/rest/retrace, but still a day to take notice.)  As always, I don’t have any answers, but maybe the charts have an indirect clue or two. (NOTE:  Of course, that recent news I mentioned above may have a significant “say” in AAPL’s near-term price action.)

– Short-term overheated until a few hours to close?  You could say that.  MACD-h was spiking, the Williams/RSI indicators were pretty solidly in “overbought” territory, and AAPL rocket-launched its way past three of my home game trend lines (ranging from the low 520s to the low 530s), cruised past 540, and briefly broke above a certain light blue trendline up in the low 550s or so.

– That “fourth” trendline, by the way, is the “mega macro” trendline that until recently did a superb job (in my humble opinion, anyway) of trendlining the lower bounds of AAPL’s price action, until, well…that multi-month downtrend AAPL just fought its way out of.  We’ll see whether that trendline returns to relevance in the coming weeks and months.

– Considering the super-accelerated micro uptrend, some retrace doesn’t seem all that bad, especially when you take a look at the daily chart.  Not that my opinion means much of anything, but I’d call the current retrace welcome, even a bit “overdue”.  Seems fair to measure the latest move from 513.67 to 564.33, and applying the Fibonnaci levels/”rules of thumb”, AAPL still has several points to “give” before even reaching the “strong uptrend if it holds” 38.2% retrace level (about 545).

On to the daily chart: 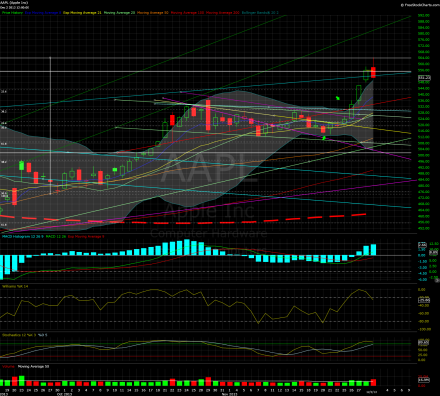 – Yes, a potent “rejection” at around 564, but in the context of recent price action – it’s hard to argue that significant “damage” was done to the chart.

– If anything, the pullback, though substantial, could be “healthy” in the intermediate term.  AAPL was flying outside the BBs – even at Monday close, it still floated above the upper BB.  The EMA-8 is over 10 points below.  Doesn’t seem to be much harm in letting either or both “catch up” to the turbocharged price action as of late.

– Depending on your point of view, AAPL might have hit a measured move target – the current sub-uptrend took AAPL up about 50 points in a few short days, and the previous uptrend saw AAPL bounce from the high 470s to the low 530s (a roughly equivalent move) if you don’t count the post-earnings breakout failure day.

– A day like this won’t break the micro uptrend, to say nothing of the intermediate uptrend move from 388.  All the same, bulls should never get too complacent…though the latest news of impending iPhone pre-orders from some subsidiary of China Mobile suggests that “trim and trail” may be situationally better than selling at a perceived top and waiting for a pullback that might not necessarily happen (ah, the clarity of hindsight in my particular case – c’est la vie, as they say).

Tomorrow should be very interesting.  See you on the trading floor soon!