As mentioned yesterday, I’m thinking AAPL could continue to trade even more unpredictably than usual for as long as several weeks.

Remember, Apple is just starting pre-orders on the second-tier iPhone, the five-color iPhone 5C.  First-24-hours pre-order numbers may or may not be issued by Apple next Monday – iPhone 5S isn’t part of the mix and won’t be until the day of launch (translation:  for opening weekend, it would appear that virtually 100% of iPhone 5S units sold will be at brick-and-mortar locations).  So there’s plenty of iPhone-related stuff for WS to process (and “act on”) in the next couple of weeks.

Time for a quick, low-commentary look at the charts:

– “Right Shoulder Watch”.  Not sure how you can make the formation out of two-thirds of a head, but never hurts to keep an eye on potential bearish formations, particularly in a potent shorter-timeframe downtrend.

– Not much of a bounce, and in the tug-of-war between Wall Street and Carl Icahn – well, really, did anyone really expect a CNBC interview to ignite some 15-20 point snapback?  It’s no secret Icahn’s in it for the longer term, so if anything my guess is Icahn is more price support than catalyst at the moment. 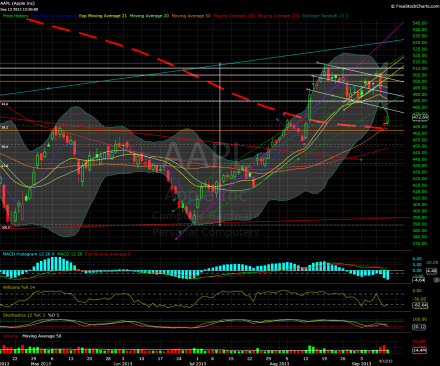 – Would be nice if AAPL eventually got an island bottom formation going.  But it’s just two candles into this big drop so far.

– The 38.2% Fib retrace level was retested and held, with AAPL gaining a bit of distance from the “good overall uptrend” borderline.

– Not sure if the 50-day will be important as an average.  At least this time around, the crossover of the SMA-50 and SMA-200 didn’t really mean anything.

– Much too early to make a read based on this timeframe at least, in my humble opinion.