I suspected AAPL would trade with high volatility and unpredictability for days or even weeks.

I mean heck, I started the AAPL Tree when AAPL was at its most recent intermediate-term trend bottom (the 380s).  I’m no stranger to wild downside trading.

Even so, today was a bit of an outlier, even by AAPL standards.  A bearish reversal day with as much or possibly greater potency (or at least surprise) compared to the day much of the world realized Carl Icahn had a Twitter account.

As I’ve mentioned before, with high unpredictability comes much tougher reads, even though my humble reads always look backwards by design.  So, for those couple dozen or so visitors who stop by (and thanks for visiting, my readership is now in double-digits :D!), keep in mind that commentary will be kept to a relative minimum.  My original intent with this blog actually wasn’t to update every day, much less with multiple charts, so updates may *cough* taper off here and there.  Though like I said, I started the AAPL Tree in the teeth of a downtrend.  This blog isn’t capitulating anytime soon. 😀

Now that that’s out of the way (not to be repeated in the future, much), today’s hourly chart: 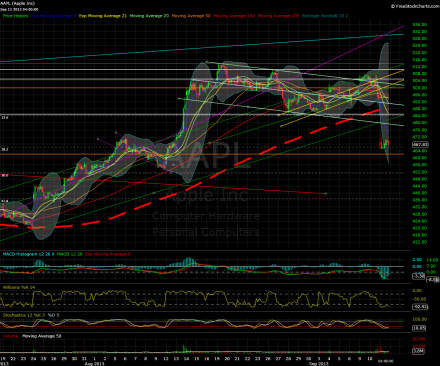 – Thrilling for bears, chilling for bulls.  With AAPL opening with a 20+ point gap down, all that you’re basically left with are reference levels and the very beginning of watching for potential new formations.

– Never mind the sound of one hand clapping.  Can you make a (new) head and shoulders pattern with “two thirds” of a head and a gap-down right shoulder?  Who knows – I’m sure the bears would love to try.

– A 27-point drop can have the tendency of breaking lots of levels and 20-point-wide parallel channels.  And base uptrend channels.  As you see here.

– AAPL’s catastrophic trading had the effect of filling the gap from the high 460s.

– Clearly, there’s a couple of AAPL skeptics out there.  Just a couple.

– The 38.2% retrace of the “master uptrend” was tested today and held.  “Conventional wisdom” says bulls don’t want to see a quick retest.

– The non-div-adjusted SMA-200 was tested today and held.  Clearly, it being under such sudden pressure is bad for bulls.  Say hi from up above, a bunch of moving averages!

– The last time there was a gap down anything close to today was the January earnings disappointment earlier in the year.

– This is a very odd way of resolving a volatility squeeze.

– If Apple as a company can somehow survive the next few years, there’s a tiny chance the downside gap today may be a point of reference in the future.  OK, so I was being a bit sarcastic there…again. 😀

– Don’t ask me what today’s crazy price action means.  Sure, a kinda-inverted hammer in a micro downtrend, but also a waterfall that seemed to appear almost out of nowhere (even if pre-market strongly hinted at the selling to come).

– Keep hanging on to your hats, whichever side of the AAPL trade you’re on.