That rally sure didn’t last long, did it.

“QuickTake” (get it?) means what it says on the tin, shorter-form commentary on the charts (which I may be doing a lot more often since it saves on words and a bit of time), so here we go: 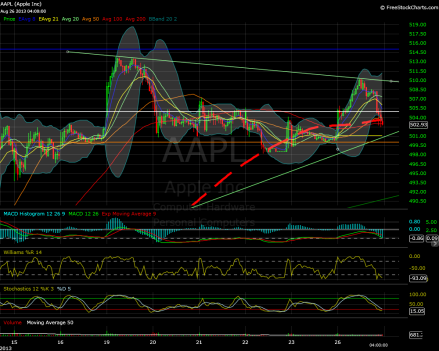 – I know, I know, the situation in Syria apparently played a role, but whatever the case, here we are.  Oh look, 500-505 purgatory at the close.  Again. 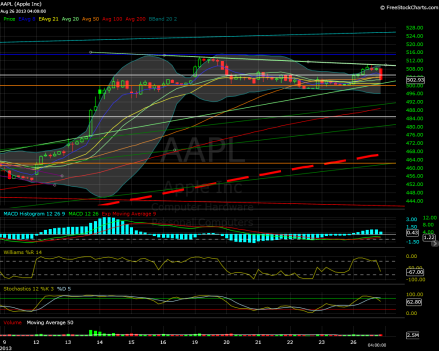 – Ugly final candle.  But not unique to AAPL, and MACD-h remains in positive territory.

– AAPL close to micro oversold on Williams oscillator; what does it mean, need more clues from price action as usual.

– Is another pennant with lower trendline first contact point from Aug. 15ish forming? Recent price action hovering just over 500 makes me skeptical as far as this timeframe is concerned (too much of the price action is below the potential pennant lower trendline). 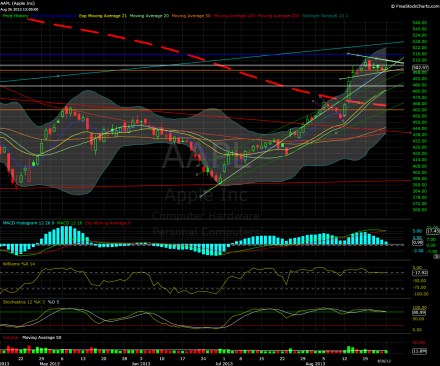 – For some reason, pennant-type formation looks somewhat more reasonable when there’s only daily candles to look at.

– Potential warning signs – MACD-h continues to dip, AAPL continuing to get rejected when trying to stay above 505 (8/19, 8/26 “breakout failures” and not very pretty candles to boot, although both were net up days)

– Overall trend is unmistakably still up.

Could be a volatile trading session tomorrow.  Best of luck to all.