Green arrow over to the right represents the last time I checked in on AAPL from a technical perspective.

See that yellow line?  It seemed to be a controlling downtrend line from around early May, and was “confirmed” through June, since AAPL never broke through. 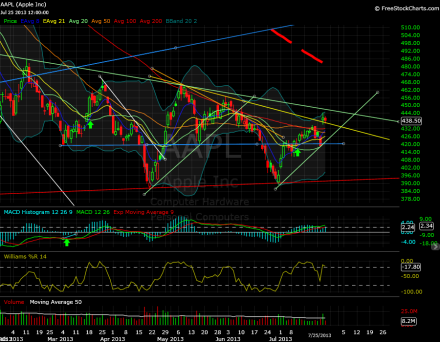 Happy days are here again?  You should know better than to ask me that question – I can’t and won’t ever claim to have any expertise in technicals.  But since one or two of you DO stop by to get my “take” on AAPL’s action – and are tired of my endless disclaimers and are far too intelligent to ever base a trade or investment on anything I say – OK, fine.

– Personally, I think AAPL breaking above that downtrend line, and staying there so far, looks quite constructive.

– Volume is back to being horrific at just over 8M (we’ll see if that’s a new normal or a continuous warning sign), but AAPL isn’t filling in that gap from 418.99 (Tuesday closing price) at all, and it did manage a slightly higher low than yesterday.

– MACD-h snapped back, which I’d think bears generally don’t like.

– Lower BB on the daily is starting to hook upward more sharply.  I’ll take that as implied price support until it isn’t.  Speaking of BBs, AAPL is actually hanging out on the upper bounds, which it hadn’t done since around mid-June – continuing a trend from around July 9.

– AAPL went back to being overbought much more quickly than it has recently.  Yet another bullish change in composure.

So while AAPL hasn’t exactly recovered, at least it’s out of any immediate danger.

As far as levels?  Who knows, but there’s the SMA-200 up there at around 480ish and all the others below, which is a nice change.  Call the SMA-200 a longer-term target for AAPL bulls (which includes me).

– As it so happens, there’s one more maybe-controlling downtrend line that AAPL has yet to “break” – that pale green line using Feb 11 and May 7-8 as potential connecting points.  That invisible line will be at around 446 or so by Monday.

OpEx might affect AAPL tomorrow, it might not.  Anyway, we’ll see if anything interesting happens the next few trading days.

One thought on “AAPLTalk, 7/25/13 Market Close: This Looks Different, Maybe.”