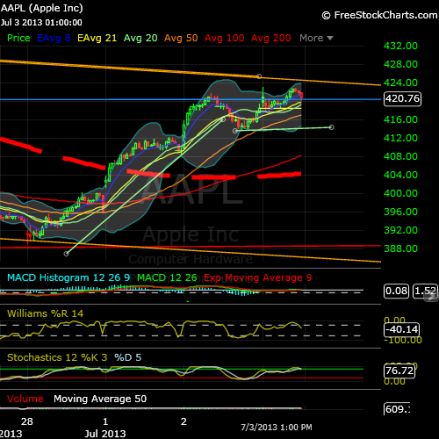 I’ll be here all week!  You’ve been a great audience, both of you!

Daily chart is after the jump.

AAPL gained a couple points but finally took a break Wednesday, closing around the middle of the range and setting up a doji-type candle in the process.  It also closed nine cents above the SMA-20.

The daily MACD-h is actually now the slightest bit positive.¹   Volume was pretty impressive (at about 8M) for a half-day and half of Wall Street headed for the Hamptons or wherever. Fast stochastics are moving very quickly towards an overbought reading (it has been an over 10% move in just a few days, after all).

Is this pause in the accelerated countertrend up the start of a bull flag? My answer – you’ll only know if it triggers. If there’s anything AAPL charts have taught me since September, it’s that potential bullish signals can be very hard to trust. The bull-flag seeming pattern that wasn’t recently (see circled region). The potential mega IHS pattern that never triggered (around Feb-March to early June). And that’s just recent price action. And per what I understand are traditional pattern principles, the bull flag would imply a roughly 30-point move on top of the one we just had. That’s a tall order for the short term. And all the while, the calls for a retrace after this quick and potent upside move are getting louder. (And hey, “healthy” retrace is always fine.)

So maybe 30 points is asking a little much as of right now.  But how about a move more like 5-6 points? You might have noticed a potential IHS on a micro basis (see square):

A quick move in either direction may help confirm or reject that hypothesis and well as provide clues on micro composure. With the caveat that this market is thinner and potentially more volatile/less instructive due to the 1.5-day intra-week vacation and many market participants not having even shown up on Monday.

At the end of the day, I always try to keep focus on price levels. I’m a simple person so I’ll typically keep only a few in mind at any one time. Immediately below there’s the 418ish-420ish zone. Is it ready to turn into support? A little further down is recent micro support, around 408ish-410. There’s also a potential countertrend line I’m tracking “just for fun” because AAPL has yet to fall off the pace set on Friday.  This post is already getting too chart heavy, so you can measure it yourself (amusingly, it intersects with the upper bound of my early warning channel in about a day at around 422).

Looking up from 420.80, there’s 425ish-427ish which corresponds to the potential IHS measured move, plus there was a little micro support there in the past. 430ish has been an action area in both directions, so that’s my other upside level on a micro basis.

To those who observe it, hope you had a Happy 4th and got to relax, celebrate and recharge. Friday should be very interesting.

¹  I generally interpret MACD-h crossovers to the plus or minus side as a potential early signal of intermediate trend reversal.